Most newspaper stories are still too long

The news cognoscenti gasped when the Columbia Journalism Review recently reported that the nation’s leading newspapers aren’t writing as many long stories as they used to. But I think most stories are still way too windy.
In a moment, I’ll tell you why, as briefly as I can. First the background:
Tallying yarns topping 2,000 words on Factiva, CJR found the number of long-form stories at the Los Angeles Times dropped by 86% between 2003 and 2012.  In the same period, stories of similar heft fell by 50% at the Washington Post, 35% at the Wall Street Journal and 25% at the New York Times.
“When it comes to stories longer than 3,000 words, three papers showed even sharper declines,” said CJR. The number of super-sized stories dropped everywhere but the NYT, which actually had a 32% increase in articles of 3,000 words or more.  Remember the epic Snowfall?
The reasons for what CJR called a “meltdown” in long-form journalism are well known:  Skinnier news holes, shrinking staffs and more digital chores for slimmed-down staffs to perform – 24/7, if you please.
But the constraints of the modern publishing business actually may be a bad thing that’s a good thing for newspapers laboring to sustain their relevance and utility for the time-constrained multi-taskers also known as their remaining readers.
With all due respect to my colleagues and friends in the business, newspapers are written by journalists for journalists, who not only love their words but also tend to equate the length of a story with the importance of the subject, if not the writers themselves. 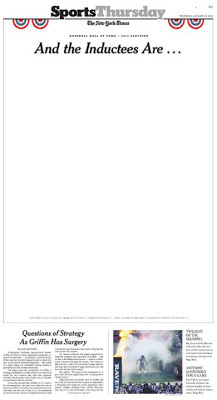 Back in the day, words often were the only way to tell a story.  In the digital production era, however, there are superior ways to tell stories in print, too – and to sustain reader engagement by making the most of the 20 minutes per day that the average reader spends with a newspaper. Here’s what I mean:
Many stories can be told better in charts, pictures or infographics than in the hundreds, and sometimes thousands, of words that tend to be the go-to medium for most newspaper journalists. When the story is about a new public opinion poll about gun control, I jump straight to the tables  that tell me who’s for it and who's not. When trying to wade through a complex investigation of corruption among the political elite in China, I find it easier to follow the money in the infographic than reading columns of gray prose. And what could have been more eloquent than the blank spot on the sports front in the New York Times (illustrated above) on the day no one was voted into the Baseball Hall of Fame?
Newspapers tend to blow valuable column inches on the details of events that everyone already has seen on television.  Watching the inauguration, I was struck by the legions of producers, reporters and cameramen covering the same story in the same way with the  same live video feed. On the morning after the event, most newspapers acted as though their readers, who are exactly the sort of people who would have watched the ceremony on TV or the web, had been in a coma for the prior 24 hours.  While journalists by all means should have been seeking to identify fresh angles, generate new insights or get ahead of the story, that’s generally not what we got.
Newspapers squander ink and tax our patience by providing extensive background on running stories where not much has happened from day to day.  Casualty tolls from Syria, political feuding in the Statehouse, economic aftershocks in Greece, procedural wrangling in a long-running trial and insignificant developments in the search for Middle East peace often top full-dress stories filled with nothing but the yadda-yadda of weeks-old background. When I hit the A-matter, I stop reading. I doubt I am the only one. On the other hand, I read every one of the 722 words in this piece.
We know reporters write long to justify the time they put into a story and to elevate its importance, as well as their own.  (I did it myself.) And editors run the pieces for the same reasons.  (I did, too.) But no one has time for this self-indulgence any more.
The way for editors to make the most of the scarce resources available to them is to be as economical with the time of their readers as they can be.  If it takes 2,000 words to tell a story, let it rip.  If a daylong assignment turns out to be worth only a brief, then so be it.
Now, in the interests of brevity, I will stop.
Newsosaur at 5:00 AM
Share